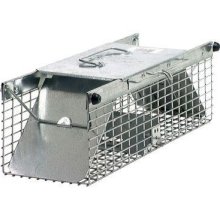 When I was eight years old, I somehow got my hands on a popular mechanics magazine. In the back, in the advertising section, I saw an ad for Havahart traps, so I wrote for a catalog. I can still remember the thrill I felt when that catalog arrived.

About a year later, I was able to save up enough money to order one of the small traps and there began my fascination with live-catch animal traps. I could capture wild animals, keep them for “pets” for a while and then release them unharmed. For fifty years, I kept that catalog safely tucked away inside a wooden box.

Well a couple of weeks ago, I noticed that something had dug under the foundation of my house and was traveling from my house to the house next door. I covered the hole over with dirt, and the next morning, it was open again. We have a pretty large population of gray squirrels in the neighborhood, but I had never seen squirrels go under a house.

I happened to be sitting on the back porch a day or two later and say a very large rat go under the house. I told my wife that this varmit could not stay around here. We had recently lost our outdoor cat, so I knew I had to do something. So I decided to check my trap collection to see if I had one that would take care of this varmit. The only Havaharts I had were either too large or too small for this particular rat.

I decided to add the 1025 Havahart to my collection. The trap arrived in the classic Havahart box with the big red heart. I was as excited as when I was a kid to open that box and try out the trap. Havahart has made some minor design changes since my last trap purchase. The doors now have a spring attached to each of the doors, which causes the trap to close much faster for a more positive catch.

I set the trap near the entrance hole where the rat had been traveling and on the third evening, I had him in the trap and safely removed from my property. I can’t tell you how good it feels knowing my Havahart trap is available when I need it.

Well I’ve got to get busy on some of my projects, so until next time, stay safe, work hard, and as always, thanks for stopping MVB Crafts.

Purchase your own Havahart traps from Havahart.com – Leader In Animal Control Solutions! Shop Now and get FREE Shipping! By making your purchase through this link, you will be helping to support MVB Crafts, and your support will allow us to continue to bring you quality content.